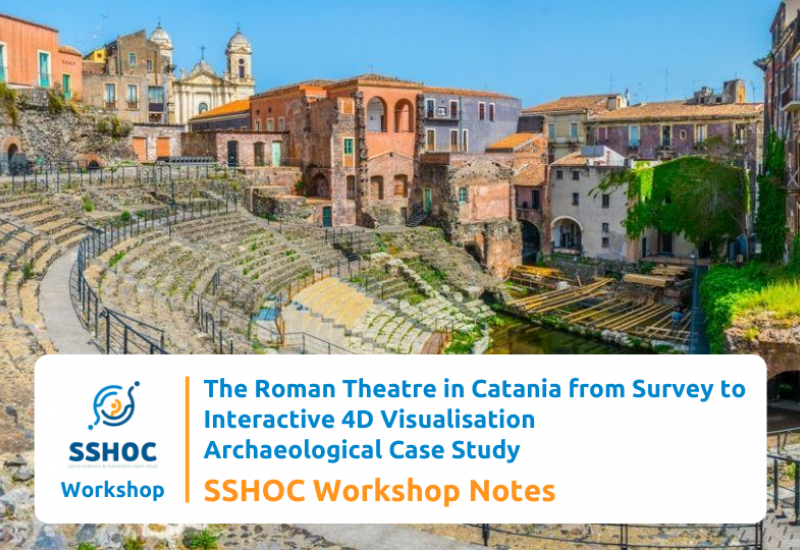 A dedicated interdisciplinary community within the SSHOC project is working hard to bring archaeological research closer to the European Open Science Cloud. Represented by Wolfgang Schmidle (German Archaeological Institute), Alberto Bucciero and Emanuel Demetrescu (both Institute of Heritage Sciences at CNR), they presented their work-in-progress to a broader community on 25 May 2021, with the aim of introducing the workflow developed for processing archaeological survey data for a reconstruction of the site. Organisers also wanted to provide an opportunity to exchange experiences in the broader context of archaeological data reuse and visualisation.

Case study and the reconstruction process

The archaeological site that was selected for the case study is the Roman theatre in Catania (Sicily), a very well preserved example of architecture with several building phases. The theatre had been studied earlier and a high-quality virtual reconstruction of the site based on laser scanning was produced; it was, however, not connected to the data that led to this reconstructive hypothesis, and the metadata were available only as a scientific publication. The team needed to provide open data and open formats for the reconstruction and required a tool to disseminate it. Project also needed to connect different platforms to annotate, visualise and enrich 3D models.

Formally, it is an oriented graph that can be annotated with the metadata. It is an extension of the standard archaeological Harris matrix, a record of the stratigraphic sequence that depicts the relative chronology of the elements discovered during the excavation. In EM, the process starts from the gap in material culture - a broken element (negative stratigraphic unit) that needs to be reconstructed, with the presences and absences in temporal relation.

As a way of sharing and connecting the intermediate data that is produced in the process that leads from the study of an archaeological site to the determination of its reconstructive hypothesis, EM was integrated with Arachne (iDAI.objects), a database of objects. Arachne is a data service of the iDAI.world, a system of open access web services for archaeological research that also includes iDAI.field (a system for documenting excavations and surveys that can also be used offline) and iDAI.chronontology for temporal terms. The Roman theatre in Catania is represented in Arachne both as a place and as an object - building with description, dating, and linked objects from other sources and projects, which creates a network of archaeological information.

The possibility to connect to the different sources is important for the integration of the EM with the iDAI tools. The connections between buildings, places, objects, publications, norm data in Arachne is building towards Linked Open Data. On the other hand, the project offered an opportunity to rethink the process that leads from the study of an archaeological site to determination of its reconstructive hypothesis and its 4D representation. Each of the many steps of this process (from the remote study phase that is mostly biographical and produces references to publication, to field survey, then data processing that leads to the visualisation) produces intermediate data that is used in the next step and is easily lost if the focus is on the final result - publication. Team recognized the need to apply the FAIR principles to the intermediate data and share it in a centralized repository to prevent the loss of data and knowledge. The integration of the EM and iDAI.world systems is a step in the right direction.

Three presentations in the second part placed the case study into a broader research context. Athina Kritsotaki (Foundation for Research and Technology Hellas) presented the SSHOCro, a workflow model that aims to describe the full data life cycle in SSH research. SSHOCro both uses and extends the CIDOC CRM (ISO21127), an event based ontology. It can be applied as a standard to devise and implement metadata capture schemes for tracking the data life cycle in individual projects, institutions, or disciplines; it can serve as a common language between SSH researchers and IT specialists; and, when encoded in a semantic data format (e.g. RDF), it can be of use for mapping, transforming and integrating existing data across projects, institutions, and disciplines into interoperable pools (semantic repositories) of information for re-use and further exploitation. The SSHOCro approach provides the possibility to distinguish the procedures and thus has important links with the Catania theatre case study, helping reenact previous research and analyzing how it was performed in order to make it transparent.

Holly Wright (Archaeology Data Service) led a discussion on FAIR principles in archaeology where research is often unrepeatable and digital data is complex and heterogeneous. ADS recently undertook an audit of FAIR compliance for archaeological data that confirmed the FAIRness of the archive. Work in the future will focus on reusability and trust.

Bruno Fanini (Institute of Heritage Sciences at CNR) presented the EMviq tool (Extended Matrix visual inspector and querier), a cross-device, online interactive 4D visualisation tool that works as a query interface to the Extended Matrix. It has three main aspects: exploration (users can navigate movement through both space and time in the multitemporal virtual environments), query (inspection of 3D shapes - proxies), and search (users can search or filter by proxy ID or by term). In the SSHOC project, the original desktop prototype has been developed into a flexible online 4D tool that can be used by remote professionals for validation of the Extended Matrices.

The virtual reconstruction process based on the EM formal language currently consists of several heterogeneous working steps that require both desktop and online tools. An online unique cloud service would unite the different applications in one access-point and would guide a researcher through the reconstruction process. Work on providing such a service will continue in the E-RIHS project. Another area of work is data integration and the classification of time within the EM, necessary for the connection with the iDAI.chrononthology. EM moves towards fully supporting the CIDOC-CRM in version 2.0.

In order to improve the tool and disseminate the method and software, the team is joining forces with other institutes and researchers in the Open Extended Matrix Initiative. The initiative organises courses and workshops, offers support to the users, and receives a lot of favourable feedback from the community.