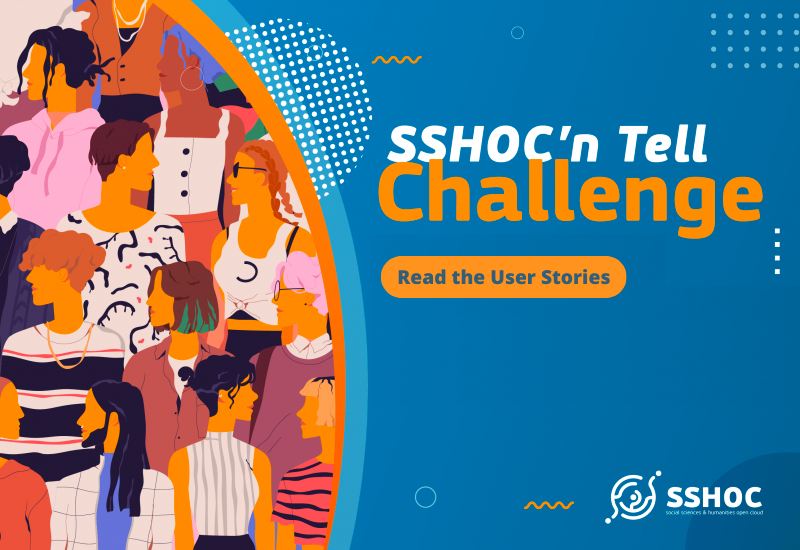 The SSHOC’n Tell Challenge was a hackathon run parallel to SSHOC’s final conference, Advancing SSH Research with SSHOCingly good and sustainable resources, with the aim of getting users to test out SSHOC tools and create compelling real-user stories. The challenge resulted in a total of 6 user stories which have been published on Zenodo and on the SSHOC website.

The winner of the SSHOC’n Tell Challenge was the user story Localizing tools by Amelia Sanz, María Robles, Adrián Menéndez de la Cuesta from Complutense University of Madrid. They examined the UX of the SSH Open Marketplace as well as how it could become more usable for Spanish speaking users. Read more here.

Second place was The University Library helps you on your way to Openness by Joeri Both, from University Library of the Vrije Universiteit Amsterdam, using the SSH Training Discovery Toolkit to find materials to use in the development of training courses. Read more here.

Third equal was League of Data as a teaser for a data management training by Ellen Leenarts from DANS, who tested the League of Data training video game. Read more here.

The other third place entry was How to use VCR and Switchboard in teaching and training by Iulianna van der Lek, CLARIN ERIC, Janna Besamusca, Universiteit Utrecht/WageIndicator, and Nanette Rißler-Pipka, GWDG/DARIAH ERIC. They examined how the Virtual Collection Registry (VCR) and the Switchboard can be used in academic teaching and training. Read more here.

You can find all our success stories here:

The University Library helps you on your way to Openness

League of Data as a teaser for a data management training

How to use VCR and Switchboard in teaching and training