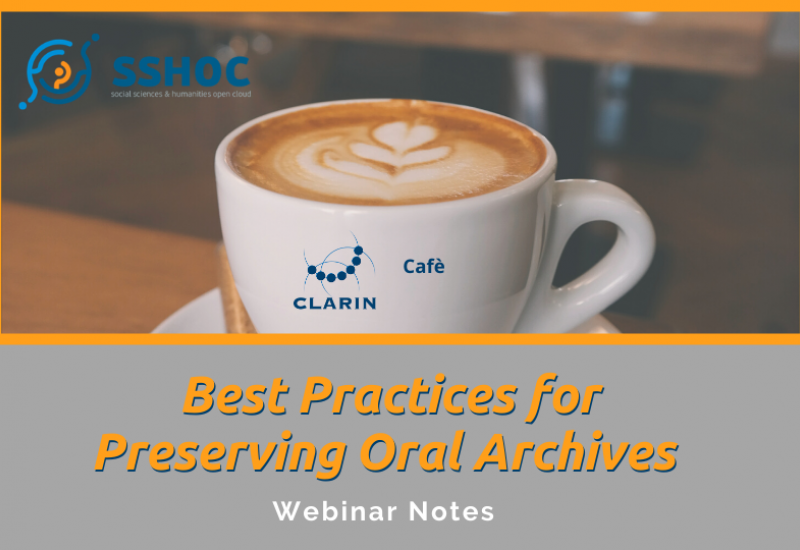 Oral sources are extremely fragile, but valuable research objects that are worth preserving. However, this often proves much more demanding than preserving other historical sources, such as artefacts or written documents, since their preservation relies on specialised infrastructure. To inform the oral history scientific community of developments and available resources that can support oral history researchers in their work, SSHOC and CLARIN ERIC recently teamed up to deliver a webinar, titled “How Not to Spill Coffee on Your Tapes. Best Practices for Preserving Oral Archives”, under the framework of CLARIN Cafés.

The webinar was introduced by Francesca Frontini, who is a member of the CLARIN ERIC board of directors, and Monica Monachini, who is the national coordinator of the Italian CLARIN consortium, and who are both actively involved in SSHOC WP3. Francesca first gave a brief introduction on the technical and knowledge sharing infrastructure of CLARIN and presented it in the context of oral history research. Monica then presented the goals of the SSHOC project, such as the creation of an EU-wide SSH Open Marketplace whose tools and services will conform to Open Science and FAIR Principles.

This webinar, which was a thematic continuation of previous SSHOC events dealing with spoken data such as the Tutorial on Transcribing Interview Data from March 2020, was an awareness raising event, as its goal was to provide context to SSHOC work on audio data and to inform the community of successful use cases in dealing with the management, preservation, and enhancement of audio data.

The first speaker was Silvia Calamai, who is Associate Professor of glottology and general linguistics at the University of Siena and a member of the scientific board of CLARIN-IT. She presented the Italian Vademecum, which is a document with best practices and guidelines for the preservation of oral sources, which are significantly more fragile objects than other non-audio records. She described the main problematic aspects of dealing with oral data in research:

The Italian Vademecum arose as a response to such needs. Currently, the documents are only available in Italian, but an English adaptation is envisaged. It is, as Silvia informed us, a document made up of three parts.

It is noteworthy that the Vademecum was also the first document in history where Italian humanities institutions started working on a shared vocabulary for preserving oral sources. Silvia concluded her talk by announcing that the final version of the Vademecum is set to be released this summer.

The second talk, which focused on the last two issues of the open access journal Sonorités, was given by Véronique Ginouvès, who is in charge of the CLARIN-FR centre Phonothèque MMSH – Maison méditerranéenne des sciences de l'homme, and by Claire Cialone-Gregoire, who is an archivist that has edited a recent special issue of the journal.

Véronique began the talk by introducing Sonorités, which is a journal published by the French Association for Sound, Oral, and Audiovisual Archives (AFAS) that focuses on the use of oral sources both in humanities and social sciences as well as in the wider cultural context. Véronique then presented the current, i.e. 48th issue of the journal, which focuses on the preservation and curation practices in the ethnomusical collections of two museums in France. To showcase the collections, Véronique played a recording of Ai rescontra ma mio, a popular French burlesque song recorded on cylinder in 1900.

In the second part of the talk, Claire Cialone-Gregoire presented the special issue of the journal dedicated to the late Michel Seurat, a sociologist who worked in Lebanon and researched political aspects of Islam in the context of the Lebanese Civil War. The special issue focuses on oral interviews carried out in Lebanon and Syria by Seurat between 1981 and 1985, which among others include two survivor testimonies on the Hama massacre that took place in 1982. Such recordings from times of strife and turmoil, as Claire noted, are immensely powerful historical artefacts that can also strongly affect, on an emotional level, the archivist curating them.

A lively discussion followed the two talks, with a number of questions from researchers currently working on the publication of their own archives. For instance, there was a corpus linguist currently working with a multidisciplinary team made up of mathematicians, architects and historians to create the AFOr archive, a collection of different resources such as scanned documentation on audio records, interviews, poster works and other promotional materials self-produced by Italian artisans in the 1960s. He remarked how hard it is to build a network of collaborators from different disciplines working on a single project. He therefore found the experiences of the Italian Vademecum, whose creation involved precisely such a network-building effort between researchers of different backgrounds, especially illuminating for his own endeavours. Lastly, a post-doctoral researcher from the University of Bolzano said she was inspired by the Café presentations to deposit her own spoken corpora in the ILC4CLARIN repository, which offers a platform for long-term preservation and re-use.

Want to know the details?

Watch the webinar recording or scroll through the presentation slides.

If you work with oral sources, you might also be interested in training webinars focusing on oral data processing and management.