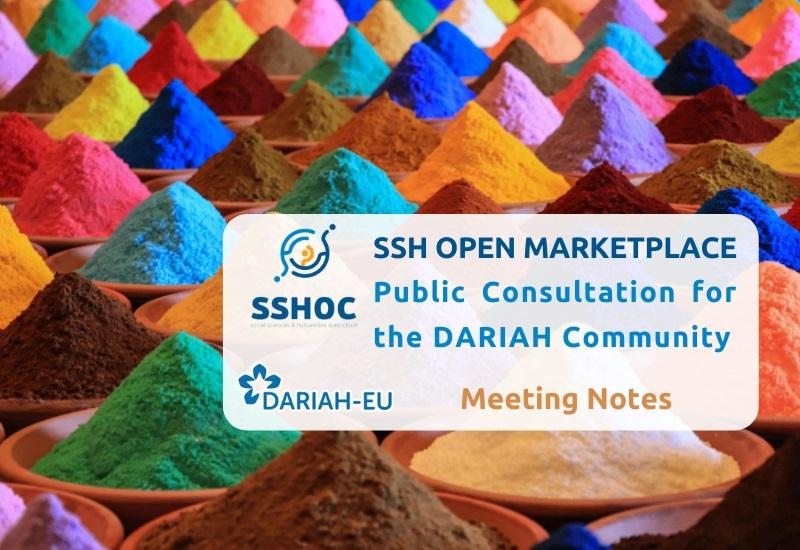 The SSH Open Marketplace: Public Consultation for the DARIAH Community, held on July 3rd 2020, aimed to give DARIAHns an early glimpse of the Alpha release of the SSH Open Marketplace developed within the SSHOC project. The goal of the session was to present this discovery portal connected to the EOSC ecosystem, to collectively think about the concept, and to present the different ways the DARIAH community can get involved.

The discussions that followed these presentations and demonstrations were very rich and the DARIAH community gave feedback, shared concerns and made suggestions. A summary of the key points can be found below.

Don’t make it just a catalogue!: Participants underlined that the SSH Open Marketplace shouldn’t be “just another catalogue”. They suggested that future developments should be more focused on the “market” aspect of the portal, positioning thus the Marketplace as a social place where users can exchange practices and methods and where social interactions can be fostered, in forms of community efforts, tagging or curation for example.

Build on existing communities: One of the key messages was that curation is very important.  As one of the core aspects to sustain the Marketplace in the long run is to foster the motivation of curators (contributors and moderators), different incentives were discussed as to how to build this community of editors. Participants stressed the importance of relying on existing community-building experiences within DARIAH by involving DARIAH Working Groups members in the curation process for example.

Credits and not competition: Giving credits to contributors and moderators of the SSH Open Marketplace was one of the clearest demands and comments coming from the participants. One way to ensure contributions of different research communities is to demonstrate the added-value of having accurate and carefully curated entries in the SSH Open Marketplace. Furthermore, for research-oriented communities like DARIAH, the possibility to reuse the aggregated and well curated content of the Marketplace could be a potential motivation for contributions. In the long run, if researchers could get academic credit for publishing their workflows in the SSH Open Marketplace, that could be a great step for the DH community.

The session ended with a little poll to collect answers of the attendees regarding the ways the SSH Open Marketplace could support their work.

The webinar concluded by describing the SSH Open Marketplace as a “broker” to get to the desired tool, resource or workflow for a research topic, or as an entry point to discover resources not known before and useful to achieve a task.

You can find background information, a recording of the session and the presentation slides here.

This webinar is part of a series planned within the SSHOC project. This first edition, focused on the DARIAH community, will be followed by other sessions addressing different communities’ needs (e.g. CLARIN, CESSDA, E-RIHS, LIBER). Follow the SSHOC project for more.

Dataverse for the SSHOC Community

Dataverse is repository software developed by the Institute for Quantitative...

SSHOC has released an animated video to promote their search for SSH Open...

The first in a series of SSH Open Marketplace consultations with individual...

The Data Management Plan (DMP) is one of the main SSHOC project management...