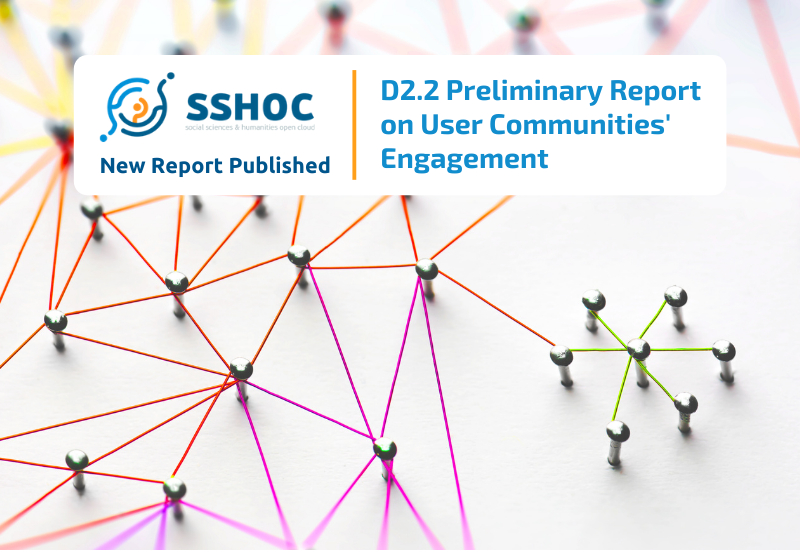 A new SSHOC report titled D2.2 Preliminary Report on User Communities' Engagement has been published. Based on the communities identified in the SSHOC project, this is the first of two deliverables that will indicate the actions taken to engage the stakeholders, and the effectiveness of the communication and promotional campaigns.

After the first two years of SSHOC, this report examines project activities from the perspective of stakeholder engagement, evaluates their impact in terms of progress against defined targets, and lays out the plan to increase uptake of key project results over the final months.

The report opens with an analysis of the eight categories of stakeholders identified by project partners as most likely to benefit from seamless access to high quality SSH research data, and the tools and resources to facilitate data processing and analysis. These stakeholders include individual researchers and research networks, research and e-infrastructures, research libraries and funders, universities, policymakers and citizen scientists. Across the board and whether to a greater or a lesser extent, each group is a potential end user of one or more of the assets around which the engagement strategy articulates.

Assets brought to the consortium by SSHOC partners or to be developed within the project are then listed and described. These assets include a comprehensive suite of research data management tools and services, and a training programme. A further asset which is being developed from scratch by project partners is the SSH Open Marketplace. A discovery portal designed to facilitate access to the tools, software, datasets, and training materials produced within the project and also to external resources which together furnish the complete data management requirements across the research life cycle.

The bulk of the report is dedicated to describing the stakeholder engagement strategy follow-up and implementation, which is elaborated along the following major lines: events, and aggregating researchers into smaller communities via a series of calls, interviews, surveys and publications, activating communities and publications. These activities are supported by the SSHOC website and social media channels.

An analysis of engagement activities by stakeholder group over the first 24 months of the project shows that a solid network has been established with researchers, universities, libraries, and EOSC initiatives, and many of the associated key performance targets achieved. These efforts will be intensified during the remaining 16 months alongside increased engagement with research funding institutions, the private sector and industry, policymakers, and citizens and citizen scientists.