FAIR principles and user feedback on the SSH Open Marketplace 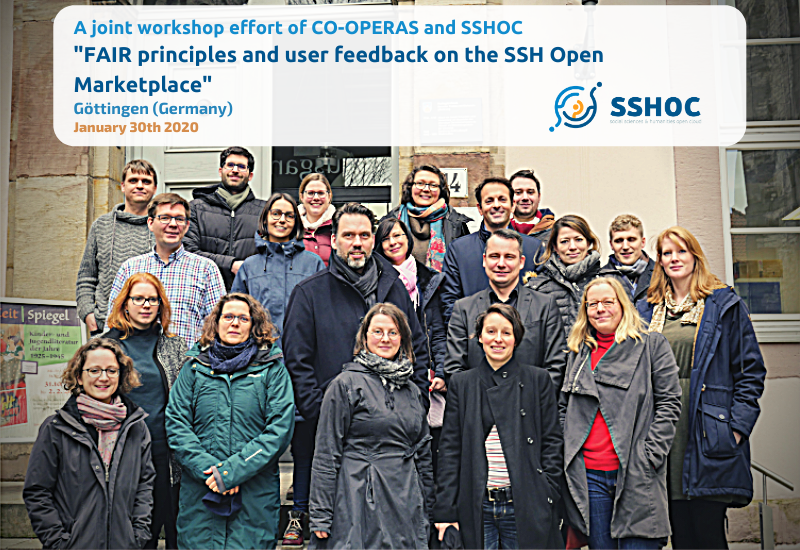 Being FAIR: A joint workshop effort of CO-OPERAS and SSHOC

CO-OPERAS and SSHOC share a similar task: supporting researchers in the social sciences and humanities to integrate their work and results according to the FAIR principles. To this end, SSHOC and CO-OPERAS organised a joint workshop revolving around FAIR principles for research data in the SSH on the one hand and the development of the SSH Open Marketplace on the other. They asked participants to talk about their needs and experiences with the FAIR principles in their own research realities and then, not independently from this discussion, to give feedback about the conception of the SSHOC Open Marketplace. The idea of organizing a series of workshops in small  local settings and in native languages - in this case in German - in order to anchor and align the FAIR principles with individual research practices was coming from the CO-OPERAS GO-FAIR Implementation Network. Already followed by a series of events in Italy (Turin), Portugal (Coimbra), and France (Marseilles), the concept has been proven in Göttingen as well: the uptake of the workshop was, with 28 participants from across the whole country, very good. The German language approach considerably lowered the threshold to give feedback and formulate own ideas.
The first part of the workshop was dedicated to the FAIR principles following the concept and structure of the previous CO-OPERAS workshops. Like in the previous events, participants with different research background (history, art history, theology, political science, Romance studies, German studies, Japanese studies, archaeology, cultural anthropology, coptology, philosophy) discussed about the following complexes of questions:

The following is an attempt to reflect the plurality of insights collected during the discussions.

Participants’ input clearly confirmed that at an epistemological level, there is a broader diversity of conceptions on what constitutes data in the SSH. In several contexts, we saw a certain degree of reluctance towards the term ‘data’: some scholars claim that they do not work with 'data', but with texts, images, etc. This scepticism seemed to be especially prevalent in disciplines adopting often hermeneutic approaches. For these scholars, the term data carries an expression of objectifying and a forceful application of methods, vocabulary and narratives of the natural sciences, which is in principle foreign to them. In other words, it would be in the spirit of a FAIR RDM to recognize that there is no unified, cross-disciplinary definition of data and that data is also a construct. Certain information are taken as data on the basis of a specific theory, methodology or technical apparatus, that said, data is in the eye of the beholder. Therefore, a FAIR data management should probably include a clarification or at least guidelines to clarify the conditions under which certain data can be considered as data in a specific research project. If this aspect is not taken into account, there is a risk that many SSH scholars will take the concept of data itself as a relapse of an anti-humanistic culture.

Among the further challenges in transparent documentation and data curation practices, the lack of incentives had also been mentioned. For scholars operating under the pressure of the "publish or perish" mentality, the publication of monographs and papers has absolute priority. Thus, while the reusability of data remains central to the work of the academic community, the lack of recognition for the work of data handling discourages the maintenance of one's own data for reuse.

Further, it was observed that there is an interdisciplinary need for the trained use of repositories: thus, if students are to learn how to handle library catalogues, in the era of digital transformation they should be prepared to deal productively with repositories, also taking into account the specific features of the different institutional and subject-specific repositories.

In the second part of the open discussion, we shifted our focus from the notion of data to scholarly usage and production of research data. Firstly, complexities around licensing have been mentioned. This is a cornerstone component of data sharing: without clear licensing statements data (re)use is difficult or even impossible. However, in many cases, scholars do not receive legal support from their institutions. Interestingly, for historians, the existing laws regulating the usage of archives often provide a solid basis for the management of their digital data, too. Furthermore, some participants mentioned that this kind of legal support is needed at the very beginning of a research project. And according to other participants, scholars often don’t take into account the FAIR principles during the phase of data collection; this seems  even more remarkable: the FAIR principles are not taken into account even when working with personal data while the general data protection regulations are considered and apply to survey data and interviews. Apart from the fact that the FAIR principles are currently not legal regulations but only recommendations, it would be useful - more participants agree about it - to reflect on the importance of the FAIR Principles for working with personal data. However, a participant from the field of cultural anthropology noted that too strict regulations could be perceived as an intrusion into the scholar's methodology, since in this discipline the storage of data is often based on trust.

Considering the phase of data processing, a certain tension can be observed between scholars considering as sensible a standardization of the RDM through general principles and others who prefer a stronger self-determination of the different scientific communities. It was also observed that a normative approach to the advocacy of FAIR principles could be problematic and not give any incentive: it is not enough to say that FAIR belongs to 'good science‘. It seems better to emphasize the practical benefits of a well thought-out and FAIR RDM for researchers and their own communities. What would also be good, many say, is to present good examples, successful use cases in following FAIR principles, Examples of RDM which paved the way for new knowledge achievements. This presuppose exchange within communities and ideally between different communities, too.

However, it is not just a matter of changing mentality and finding the right advocacy strategy. FAIR RDM also needs a proper technical approach. One participant noted that a FAIR archiving able to support data retrieval requires not only proper licenses, but also the structuring of the data through controlled vocabularies. FAIR is not only a question of goodwill, but also of technical competence. At the end of the discussion, the Triple project was mentioned, which could contribute to making the RDM more FAIR increasing the findability of data in several languages. Finally, it was also stressed that libraries rather than universities often provide the support in RDM: This situation is suboptimal and a better coordination between academic libraries and research institutes was required by several participants. At the conclusion of the discussion, a more general but central aspect was highlighted by the participants: For the development of a more efficient and FAIR-oriented RDM, a clear definition of responsibilities and roles of the researchers or research groups on the one hand and of their institutions on the other hand remains essential.

SSH Open Marketplace and involvement of the users

A core part of SSHOC is the SSH Open Marketplace - a discovery portal which pools and harmonises the tools, services, training materials and datasets useful for SSH research communities. It shall also offer a high quality and contextualised answer at every step of the SSH research data life cycles. For the SSH Open Marketplace the continuous collection of feedback and requirements from the community is essential for the development of the platform. Participatory design and user involvement are of utmost importance for shaping the content, the functions and the user interface of the marketplace.

The most popular topics among the participants have been: (1) Content of the SSH Open Marketplace with regard to formats, types, interoperability, actuality. (2) User involvement and enabling exchange among the users, particularly paying attention to the work and methods of other researchers and trying to learn from it. (3) Contextualisation and search serendipity within the marketplace, for instance how they have been rated, used and applied in other research undertakings but also highlighting related resources beyond the individual search of the visitor. These are only short highlights. The feedback itself was of course extensive and partly very detailed.

The feedback and demands of the participants towards the SSH Open Marketplace has been collected during the discussion and filling of posters and is being fed back into the development process. SSHOC deeply appreciates the time, ideas, questions and requirements expressed by the participants. The Göttingen workshop is not a stand-alone event in this regard but integrates within a continuous exchange with the community.

Next steps for the SSH Open Marketplace

As the SSH Open Marketplace is still under development, we kindly encourage feedback from the community. If you want to get a clearer view of the system specification, you can consult the Deliverable 7.1, and you can follow the development on our Gitlab instance.  If you are interested to know more about the SSH Open Marketplace and to contribute to its creation, you can register as a SSHOC user.

Dataverse for the SSHOC Community

Dataverse is repository software developed by the Institute for Quantitative...

SSHOC has released an animated video to promote their search for SSH Open...

The first in a series of SSH Open Marketplace consultations with individual...

The Data Management Plan (DMP) is one of the main SSHOC project management...