D9.4 Database with the metadata of surveys to EMMs across Europe

Home / D9.4 Database with the metadata of surveys to EMMs across Europe 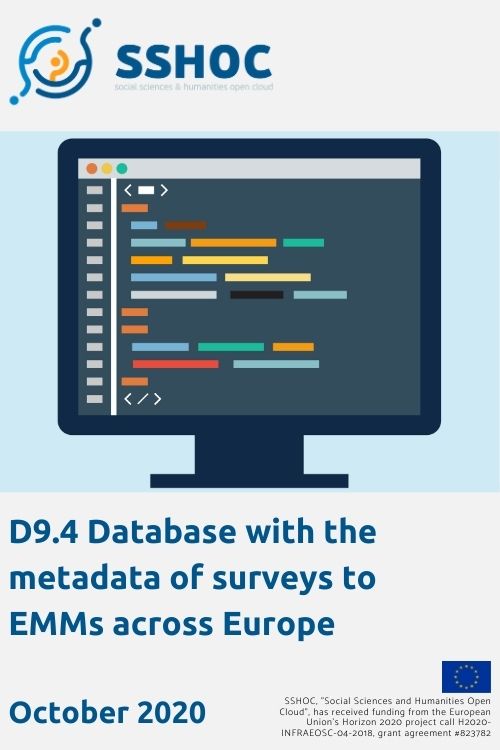 This document is a deliverable of the Social Sciences and Humanities Open Cloud project (SSHOC) and describes the Ethnic and Migrant Minorities (EMM) Survey Registry: an online, publicly available database and tool that displays compiled, survey-level metadata of existing quantitative surveys undertaken with ethnic and migrant minority (EMM) populations in Europe. The registry is being jointly developed by SSHOC’s Task 9.2 Ethnic and Migration Studies group which is part of Work Package 9 Data Communities, in collaboration with COST Action 16111 – ETHMIGSURVEYDATA,  a network of more than 200 European researchers active in the ethnic and migration studies field, and FAIRETHMIGQUANT, a French Agence Nationale de la Recherche (ANR)-funded Open Science project.

The report is intended to inform prospective users of the EMM Survey Registry, that is (non)academic researchers, policymakers, and other practitioners interested in quantitative surveys on EMM integration, about what the registry is and how it could be leveraged for their own research and/or policy-related activities. The report also aims to provide individuals and organisations involved in data curation with a concrete example of how a data community can drive the bottom-up creation of a FAIR-friendly tool for the social sciences.

The report begins by illustrating the role of the FAIR (Findable, Accessible, Interoperable, Reusable) principles in shaping how the EMM Survey Registry has been designed, developed, and delivered. The EMM Survey Registry is currently available in ‘beta’ version, andpublically displays information about 400 surveys from 11 different countries. The report follows the development trajectory of the EMM Survey Registry, describing how stakeholders specialising in data production, usage, storage, and management were routinely leveraged from conception to delivery in order to align this registry with the FAIR principles as much as possible. The report concludes by describing the concerted effort the Task 9.2 team is making to facilitate short and long-term sustainability of the EMM Survey Registry by strategically connecting and liaising with potential users interested in quantitative surveys undertaken with EMM populations.